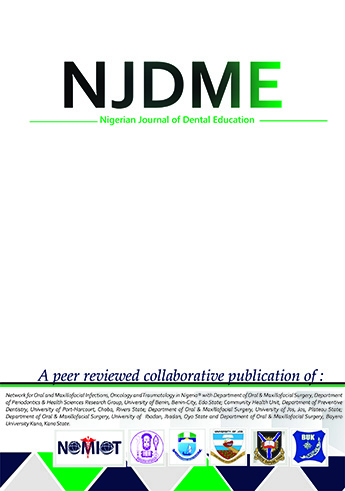 Methods: This was a cross-sectional study of clinical medical and dental students. A self-administered questionnaire comprising of two sections; sociodemographic characteristics and perception of the respondents towards OSCE was used to garner data for the study. Data obtained was analysed using IBM SPSS version 21.0. The analysis was done using frequency distribution and cross tabulations. Chi square was used to test for level of significance. P < 0.05 was considered statistically significant.

Objective: To examine the association between oral health literacy and dental anxiety among dental outpatients.

AKINBOBOYE BO, MERSEL A, MALOMO B, OLAWUYI A

Methods: Participants wearing complete denture for a minimum period of 2 years were administered standardized psychological instrument (19 items) used to test for religiosity and 12 items for self-efficacy. A Likert scale of maximum score of 4 was used for each item. Data was gathered and analysed using IBM SPSS version 21. Categorical variables were presented as frequencies and percentages. Spearman Correlation test was performed.

Conclusion: There is a weak positive association between religiosity and denture self-efficacy, which is not significant. Religiosity does not necessarily determine self - efficacy in denture wearers

Methods: A retrospective study of patients with human bite injuries managed in the FMC, Yenagoa, from January 2012 to December 2018. Data collected were age, sex, site, timespan between injury and treatment, predisposing factors, treatment offered and outcome.

Conclusion: Most of the human bite injuries were due to social conflicts with intentions to deform. Restoration to acceptable aesthetics and function was achieved using local flaps and primary closure.

Objective: Dental caries as a public health concern affects people’s productivity and quality of life. A number of studies exist on caries status of children in Nigeria but same cannot be said for adults. In addition, majority of the few available studies on caries experience of adults in Nigeria have been conducted in urban locations. If scarce resources are to be appropriated efficiently, a broader picture of the rural and urban caries trend is crucial. The objective of this study was was to assess and compare the caries prevalence and experience of the adult population in a rural and urban local government area of Lagos State as well as determine factors affecting the caries experience of adults in two contrasting populations.

Conclusion: There was no statistically significant difference in the dental caries experience between urban and rural populations. Notwithstanding the low caries experience, a lot of carious lesions remained untreated among rural and urban adult resident in Lagos. There is need for improved oral health promotion measures and preventive programs in rural and urban communities in Lagos State.

Objective: To assess the effectiveness of a dental implant training programme on dental implant knowledge acquisition and retention among undergraduate dental students

Results: There was statistically significant difference in mean between L0 (5.53±2.816) and L1 (9.08±2.614) (3.55; p=0.001). There was increased satisfaction with the level of implant education received, level of interest and preparedness to practice implant dentistry from L0 to L1 with a decrease at L2.

Conclusion: The dental implant programme which consisted of only didactic lectures is an effective method of knowledge acquisition in implant dentistry but does not translate to equal knowledge retention. Therefore, more is needed to improve dental implant training at the undergraduate level.

Methods: A descriptive, cross-sectional study of cleft children attending in a Nigerian tertiary hospital, an apex Centre for cleft surgery. A pretested questionnaire was administered by the trained interviewers to record the demographic information. A trained examiner examined all the recruited children for caries, plaque, calculus, gingivitis, malocclusions and enamel hypoplasia, according to WHO guidelines. Data from the questionnaire and clinical examinations were analyzed using the IBM SPSS Version 20.

Conclusion: The oral health status of cleft children in Enugu is poor. This underlines the need for a more vigorous approach to maintenance of good oral health amongst cleft patients, thereby preventing oral diseases.

Diabetes mellitus is a non-communicable disease that affects all age groups. A patient with diabetes scheduled for surgery requires special care as diabetes has effects on anaesthesia and surgery; anaesthetic agents and techniques also has effects on diabetes. Close monitoring of the blood glucose is done pre, intra and postoperatively. This is a review article on anaesthesia and diabetes mellitus.